So I finally bothered to move from 14 to 15 and having a couple teething troubles.

I did the fresh image install rather than upgrading the 14 to 15.

First thing I notice is that both gateway and workstation take an age to shutdown now (like 2minutes). I tried changing from 512 ram to 1gig and made no difference so wondering if it might be something else?

Secondly the ro-mode-init doesn’t seem to work for me. I installed the package and shutdown and set kvm to read-only and reboot and check the live mode in startup however it seems to just boot into the grub one rather than ro-mode one because the tick is in the system tray and from reading the wiki that only happens in the grub version and more importantly whenever I reboot it does not autoboot into live-mode which is the main thing I want.

So what could be going wrong here in both these cases?

i have not gotten ro-mode-init to work for autobooting into live mode yet either. an easy work around for the moment is to edit “/etc/default/grub” and change “GRUB_DEFAULT=0” to “GRUB_DEFAULT=2”. then, run “sudo update-grub”. on your next boot, the live mode will be selected by default going forward. it’s a simple minor failsafe for a situation where you may have inadvertently forgotten to set your whonix disk back to “readonly” in virt-manager.

First thing I notice is that both gateway and workstation take an age to shutdown now (like 2minutes).

Inefficient to discuss multiple issues in 1 forum thread. Please create a separate forum thread for that one.

just boot into the grub one rather than ro-mode

This description is too inaccurate. Can only guess what you mean. 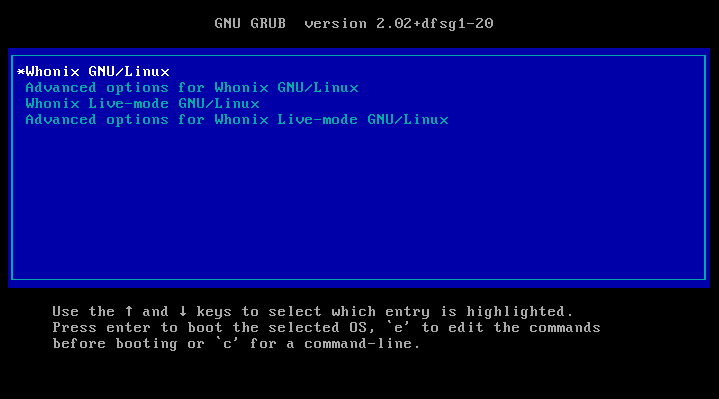 To switch to Live mode automatically?

Since grub-live is installed by default now I guess this causes confusion to co-install ro-mode-init. The second grub boot menu entry should not be there.

whenever I reboot it does not autoboot into live-mode which is the main thing I want.

ro-mode-init does not yet automatically run:

@Algernon When running with ro-mode-init I noticed the taskbar icon is unable to recognize that live mode was enabled (I tested it to be fully functional). Does the indicator only work for the grub method or is it supposed to see both?

To switch to Live mode automatically?

No, but I was expecting the system to boot into live-mode automatically. I had no idea it was due to a conflict with boot loaders as I had no idea the ro-mode package was also a boot loader; I thought maybe it just changed some settings in the current one in order to do its thing.

I don’t think I can be blamed for that when I followed the wiki to the letter, or so I thought ,and it said nothing about this. Not criticising but I had know way to know.

The wiki just says once the ro-mode package is installed to set your hard-drive to read-only, which I did, and reboot and select Live-Mode from the menu in order for it to automatically boot into read only mode on each boot.

This part is missing from the wiki.

It makes more sense given what you say about them being both boot-loaders in conflict with one another.

Also part of my confusion was that I don’t remember such issues when I installed 14, I think it automatically switched switched to the ro-mode one once it was rebooted.

Will try with suggestions mentioned, thanks.

seems to have fixed the issue. I will make a new one about the slow shutdown problem.