Running automated fuzzers is a good way to uncover unexpected bugs. Random crashes or strange quirks are quickly discovered using fuzzing. A powerful generic fuzzer that is afl-fuzzer. I really don’t want to make this a long post but I want to make a case for why its really worth running this against our script.

afl-fuzzer is authored by a talented security researcher that goes by the handle lcamtuf. He was one of the people who uncovered the recent problems with bash.

Though its not packaged for Debian it can be fetched from here: 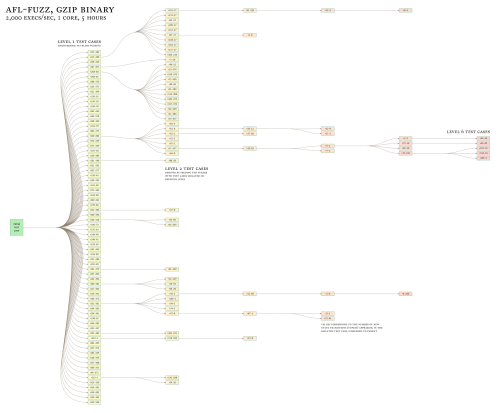 Fuzzing is one of the most powerful strategies for identifying security issues in real-world software. Unfortunately, it also offers fairl...

Fuzzing is one of the most powerful strategies for identifying security issues in real-world software. Unfortunately, it also offers fairly shallow coverage: it is impractical to exhaustively cycle through all possible inputs, so even something as simple as setting three separate bytes to a specific value to reach a chunk of unsafe code can be an insurmountable obstacle to a typical fuzzer.

There have been numerous attempts to solve this problem by augmenting the process with additional information about the behavior of the tested code. These techniques can be divided into three broad groups:

The first technique is surprisingly powerful when used to pre-select initial test cases from a massive corpus of valid data - say, the result of a large-scale web crawl. Unfortunately, coverage measurements provide only a very simplistic view of the internal state of the program, making them less suited for creatively guiding the fuzzing process later on.

The latter two techniques are extremely promising in experimental settings. That said, in real-world applications, they are not only very slow, but frequently lead to irreducible complexity: most of the high-value targets will have a vast number of internal states and possible execution paths, and deciding which ones are interesting and substantially different from the rest is an extremely difficult challenge that, if not solved, usually causes the “smart” fuzzer to perform no better than a traditional one.

American fuzzy lop tries to find a reasonable middle ground between sophistication and practical utility. In essence, it’s a fuzzer that relies on a form of edge coverage measurements to detect subtle, local-scale changes to program control flow without having to perform complex global-scale comparisons between series of long and winding execution traces - a common failure point for similar tools.

Pulling JPEGs out of thin air

This is an interesting demonstration of the capabilities of afl ; I was actually pretty surprised that it worked! $ mkdir in_dir $ echo ' ...

ShellCheck is the equivalent of lintian for bash scripts.

Its packaged in Jessie.

[quote=“HulaHoop, post:4, topic:683”]ShellCheck is the equivalent of lintian for bash scripts.

Its packaged in Jessie.[/quote]
Has quite some false positives, but still a very nice tool. Used this earlier and went though all shell scripts developed under the Whonix umbrella some time ago. Still using it sometimes.