Don’t hesitate to point out when you notice one.

This discussion fits under this topic. Many of the comments did not add any real value to the issue at hand. Even after the changes were pushed to the testers repo, the discussion still continued. Why? Quite often community members try to contribute even when they don’t have a good understanding of the topic. This is evident when users can’t let go of their idea even when they are shown its incorrect or irrelevant. Why? Perhaps their ego?

Just to be clear, all posts that I made past the “pushed to repo” post did not add any value either.

disable onions by default due to unreliability Development

At the moment we enable both, onions (primary) and clearnet (fallback) apt sources. Proposed change: disable (comment out) onions by default Reasons: Enabling it was an experiment which failed. Unreliable, bad usability (many support requests), reflects badly on Whonix. Once Debian provides onion v3 with onionbalance which works reliable we may reconsider. Once reliable we may even implement: use onion sources list exclusively for apt-get updating by default https://phabricator.whonix.org/…

Why Should Whonix should support or be interested in Android ? Development

Why Should Whonix should support or be interested in Android ? Edit by Patrick: Split discussion of reason from Running Android Apps on Whonix WIP to avoid distracting from development discussion.

Thanks for pointing it out. Unfortunately some users keep derailing threads with their strong opinions about the topic without adding value. I’ll have to clean things up if it continues.

Continuing the discussion from disable speaker by default or optional for better security?: It is a question about right balance between two strategies. The most security focused approach is: A) “Whonix” hardened gentoo based - don’t care about any laymen who will fail at usability. A way to run a “project” would be “only use this for myself and don’t bother telling anyone”. Perhaps have a blog post that very few read let alone apply about how to set up that somewhere but then that’s about …

This is a metaphor indicating that you need not argue about every little feature just because you know enough to do so. Some people have commented that the amount of noise generated by a change is inversely proportional to the complexity of the change."

The concept was first presented as a corollary of his broader “Parkinson’s law” spoof of management. He dramatizes this “law of triviality” with the example of a committee’s deliberations on an atomic reactor, contrasting it to deliberations on a bicycle shed. As he put it: “The time spent on any item of the agenda will be in inverse proportion to the sum [of money] involved.” A reactor is so vastly expensive and complicated that an average person cannot understand it, so one assumes that those who work on it understand it. On the other hand, everyone can visualize a cheap, simple bicycle shed, so planning one can result in endless discussions because everyone involved wants to add a touch and show personal contribution.[4]

Problems arise after a suggestion of building something new for the community, like a bike shed, causes everyone involved to argue about the details. This is a metaphor indicating that it is not necessary to argue about every little feature based simply on the knowledge to do so. Some people have commented that the amount of noise generated by a change is inversely proportional to the complexity of the change

I think it’s time to put a fork in that thread. It has long run its course.

A good example on bikeshedding. An important news on security issues and 0 replies. This is by comparison the “atomic power plant” situation: 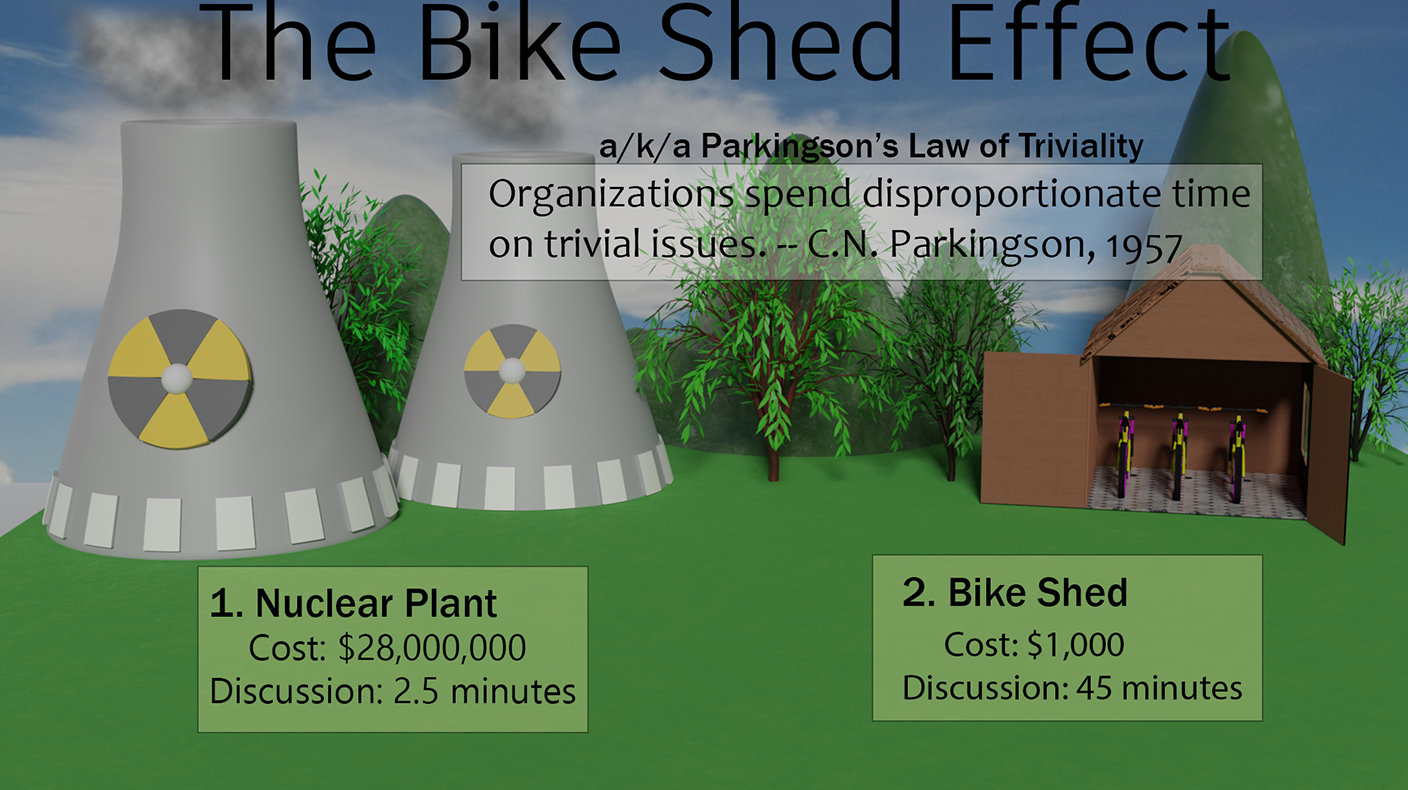