Should we install https://packages.debian.org/bullseye/flatpak by default in Whonix 16 (Debian bullseye based)?

Any software delivery mechanism that is at least as secure as apt should be considered (if it doesn’t take up too much space).

Definition of indefinite freeze attacks according to the TUF (The Update Framework) Threat Model [archive]:

Indefinite freeze attacks. An attacker continues to present files to a software update system files that the client has already seen. As a result, the client is kept unaware of new files.

This attack is difficult to pull-off for many adversaries since it requires breaking TLS. While flatpak package version information are not protected by a valid-until field [archive] these are fetched over TLS. Even if an adversary could break TLS, this would be lesser of an issue torified connections (such as by Whonix ™) since the adversary could not mount a targeted indefinite freeze attack against a specific user. Only against all Tor users, which would likely be caught, unless the adversary also has the ability to break Tor. The attack chain would be very complex. Break Tor → target specific user(s) → break TLS → mount indefinite freeze attack → exploit vulnerability due to indefinite freeze attack caused outdated software version.

To work around this issue, users would have to manually check if their version numbers of their flatpak installed applications match the version numbers available from the flathub repository. Every application available from flathub has a corresponding website has a chapter Additional information with entries Updated and Version. For example for Chromium there is the org.chromium.Chromium flathub website [archive] which at the time of writing this wiki chapter showed. Updated December 23, 2020, Version 87.0.4280.88-1. Since researching version information on the flathub website is equally vulnerable to indefinite freeze attacks as the flathub package manager itself (both rely on TLS), it is recommended to use Whonix ™ or Tor Browser for this purpose. [35]

Sometimes versions available through APT are too old, even have known vulnerabilities being exploited in the wild, for a long time. (example) On the other hand, flatpak most of the time, offers more recent software versions and/or deploys security fixes in a more timely manner.

Due to the complex attack chain, the advantages of flatpak outweigh the severity of potential indefinite freeze attacks since flatpak is sometimes the only trustworthy, easy to use source of software (or never versions) than what Debian stable (with Frozen Packages) (or newer) is offering.

Some who criticized its provided security:

some who also discussed these criticisms:

A lot of flatkill.org’s statements are made to incite fear in the Linux community. Given that all Flatpak packages and application build scripts are available and able to be edited by anyone, the appropriate response is to educate on why this is a...

We aren’t relying on flatpak’s sandbox so this is a moot point, but still interesting to follow.

TL;DR Summary of the post is: “it’s bad, but not that bad and they’re working on it.”

In comparison, APT does not attempt to sandbox any packages it installed. Hence, a lot less negative press about it.

Actually I might be better if flatpak and the sandbox would be separate projects so one project doesn’t inherit the reputation by the other.

In comparison, APT does not attempt to sandbox any packages it installed. Hence, a lot less negative press about it.

But it pass TUF which flatpak fail as well to (fully) pass it. So not only sandboxing issue but as well on package level issues.

Refactoring default installed packages… Should extrepo be installed by default on Whonix-Gateway? Usefulness? Some future hypothetical situation where extrepo might be useful to get a newer Tor version? I guess, for now, no - unless there are arguments for it.

Yeah that sounds pretty useful. If extrepo isn’t and/or grabbing too many dependencies it would be good to keep around.

sudo apt install extrepo Reading package lists… Done Building dependency tree… Done Reading state information… Done The following additional packages will be installed: libcryptx-perl The following NEW packages will be installed: extrepo libcryptx-perl 0 upgraded, 2 newly installed, 0 to remove and 4 not upgraded. Need to get 635 kB of archives. After this operation, 2,060 kB of additional disk space will be used. Do you want to continue? [Y/n] Seems OK.

Should flatpak be installed by default on Whonix-Gateway? Usefulness? Some future hypothetical situation where flatpak might be useful to get a newer Tor version?

flatpak has quite some more dependencies than extrepo.

I didn’t check yet which of the Recommends: would be actually be useful but useful for me without already.

Should flatpak be installed by default on Whonix-Gateway? Usefulness? Some future hypothetical situation where flatpak might be useful to get a newer Tor version?

Seems like overkill. No need to consider it unless Tor or its pluggable transports are not (easily) obtainable through any other means. Has to be officially distributed in this channel to even be considered, which isn’t the case AFAIK.

Possible long-term flatpak solution (particularly for Qubes-Whonix) based on 400 lines of code.

If you like it, it could be built and added as a default package in Whonix-WS in Whonix?

The steps below are functional, but you might have a cleaner method of doing it. 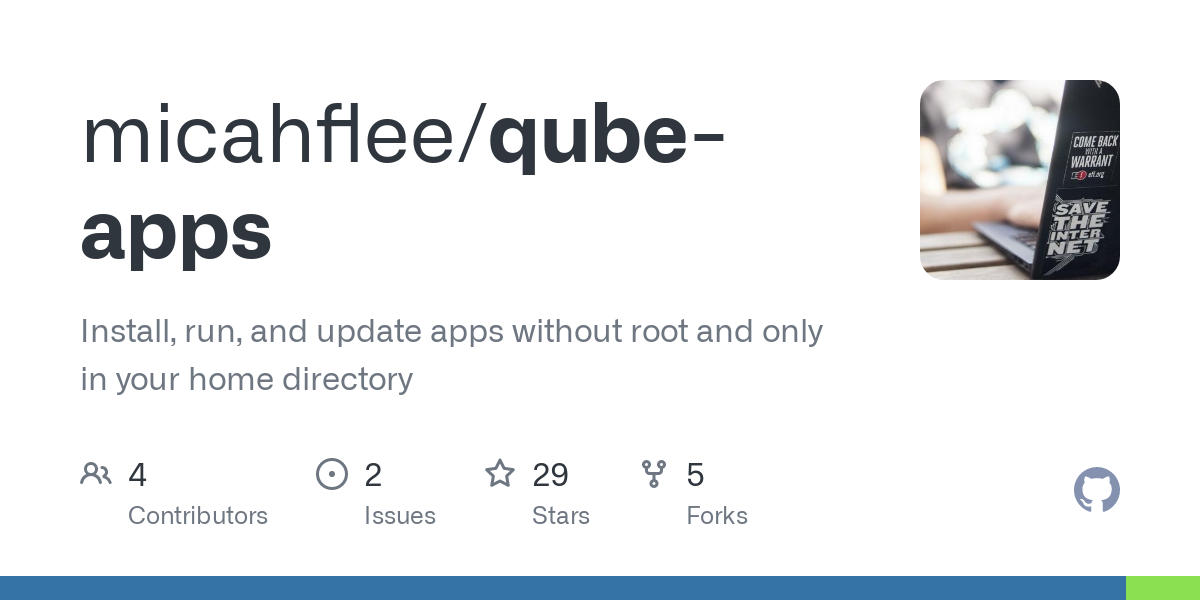 GitHub - micahflee/qube-apps: Install, run, and update apps without root and... 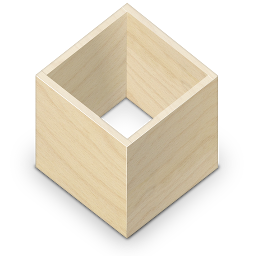 Qube Apps: a Flatpak-based app store for each qube

Tested to work with Signal Desktop as an example in anon-whonix-signal.

2. Open a terminal in anon-whonix-flatpak.

Make sure the whonix-ws-16-flatpak template is used when creating the App Qube and has all the other normal settings i.e. sys-whonix as NetVM.

Also increase the VM disk size to ~10GB so it doesn’t run out of space when later downloading applications with flatpak.

11. Add Qube Apps application to the App Qube menu under Qubes Settings → Applications, then launch it.

After shutting down the App Qube, Signal can be easily run again or updated via this utility (or removed if necessary).

This means all that is now required for future flatpak apps is:

A lot easier than constantly stuffing around with flatpak manually, although obviously the flatpak application is in the App Qube, not the Template itself.

Overall, this package if pre-built and released as part of the Whonix build would be very useful IMO.

That’s more a feature request for Qubes, not (Qubes-)Whonix.

This is a GUI for flatpak? What’s the Qubes specific part? Perhaps it should even be contributed to flatpak instead?

Meanwhile as the companion blog post that you linked points out, this is already possible from the command line by using flatpak with --user. Then flatpak installs applications inside the user’s home folder. This is persistent among reboots in App Qubes as well.

Good point - should be made a Qubes package that is available across all distros. It would address a few things:

Whonix’s greatest weakness is poor usability & complex instructions for various tasks. If this can be avoided in certain cases - like this - then it should be embraced.

I’d create a Qubes ticket for it, but I don’t really play over there.

“install KCalc from Flathub. You’re looking at a nearly 900 MB download to get your first runtime. For a calculator. Note that the app package itself is only 4.4 MB. The rest is all redundant libraries that are already on my system.”

not just the package size issue, the issue of package upgrade which will almost always will download about 500+ MB

You have it wrong, Flatpak shares runtimes between apps meaning it de-duplicates libraries and saves space in the process compared to Ubuntu snap. Sure it may initially grab a large number of libs to bootstrap the environment, but afterwards it doesn;t increase much with every new app downloaded.

but afterwards it doesn;t increase much with every new app downloaded

And according to the link you have posted he said:

If Kcalc is the only Flatpak you have installed, sure, not great, but that’s an artificial degenerate case. If you have most of your apps installed with Flatpak, the numbers are very different.

mean either go full dependent on flatpak or not.

practical test: (qubes-debian new standalone or template need to have their storage increased as default cannot handle these sizes)

Each of these numbers are similar to downloading fully debian CD version.

comparing this to native installation from debian repo:

Don’t these updates replace the current code instead of taking up additional space? Have you tried testing it to see if more space is needed after the initial disk expansion is done?

### Checklist - [X] I agree to follow the [Code of Conduct](https://github.com/…flatpak/flatpak/blob/master/CODE_OF_CONDUCT.md) that this project adheres to. - [X] I have searched the [issue tracker](https://www.github.com/flatpak/flatpak/issues) for a feature request that matches the one I want to file, without success. ### Suggestion Some applications check for existence of file `/usr/share/anon-ws-base-files/workstation` and then depending on that slightly modify their behavior. OnionShare is an example: https://github.com/onionshare/onionshare/blob/develop/cli/onionshare_cli/web/web.py#L360_L364 ``` # In Whonix, listen on 0.0.0.0 instead of 127.0.0.1 (#220) if os.path.exists("/usr/share/anon-ws-base-files/workstation"): host = "0.0.0.0" else: host = "127.0.0.1" ``` That is currently broken for OnionShare running inside flatpak. While file `/usr/share/anon-ws-base-files/workstation` exists outside of flatpak, it does not exist inside of flatpak application data folder. How could this be resolved?

Don’t these updates replace the current code instead of taking up additional space?

So what you have said is true that upgrades wont consume further storage but it will need efficient bandwidth speed to have that upgrade (or installing new fresh software).