HSTS policies must not be transmitted over insecure channels.

This was a non-issue for security. Only a warning. But to add kicksecure.com to hstspreload.org it needed to be fixed anyhow.

Status: kicksecure.com is currently preloaded, but has the following issues:

Make the TLS/SSL read at 100% when tested by ssllabs, to do that check:

Adventures in software development and getting things done.

How do you score A+ with 100 on all categories on SSL Labs test with Let's Encrypt and Nginx?

Trying to get 100% in ssllabs.com key exchange

These are old posts. What ssllabs considers 100% has changed since. Configs from back then don’t work anymore nowadays.

Visiting with Firefox, clicked on the lock symbol in the URL bar, shows:

SSL Server Test: kicksecure.com (Powered by Qualys SSL Labs) shows A+ (already highest rating) (I have never seen A++ or A+++) but “only” 90% for Key Exchange and Cipher Strength.

More reading on the topic:

Quote avoid too much security by ssllabs

Avoid Too Much Security

The cryptographic handshake, which is used to establish secure connections, is an operation for which the cost is highly influenced by private key size. Using a key that is too short is insecure, but using a key that is too long will result in “too much” security and slow operation. For most web sites, using RSA keys stronger than 2,048 bits and ECDSA keys stronger than 256 bits is a waste of CPU power and might impair user experience. Similarly, there is little benefit to increasing the strength of the ephemeral key exchange beyond 2,048 bits for DHE and 256 bits for ECDHE. There are no clear benefits of using encryption above 128 bits.

It screws some old clients, and p384 is much slower than p256 (on my VPS it’s even twice slower than rsa2048), so it’s better not to use this in production, unless you are extremely paranoid about the possibility of cracking AES-128 and/or EC P-256.

Can I increase the Key Exchange and Cipher Strength I'm using for a 100%...

I'm not sure it its part of the certificate or something else - but does anyone know if its possible - and also how I could start to increase both the Key Exchange and Cipher Strength so I can achieve a 100% score on all 4 bars on SSLABS - or where I...

Not vulnerable to TLS Logjam attacks.

How do I disable just one cipher out of OpenSSL TLSv1.3 list?

Default RSA key bitlength should be 4096

as your mayor idea is security take the maximum possible ... don't use scary def…aults, make it secure by default and let users downgrade if they need to. Thank you for all your efforts

Default RSA key bitlength should be 3072

[According to NSA](https://apps.nsa.gov/iaarchive/programs/iad-initiatives/cnsa-…suite.cfm) and [ANSSI](http://www.ssi.gouv.fr/uploads/2015/01/RGS_v-2-0_B1.pdf), RSA with 3072 bit-modulus is the minimum to protect up to TOP SECRET. We should not be in the red line of cryptography. This security by default will bring the needed protection for all the Internet users that pass by HTTP webservers powered with Let's Encrypt.

After reading lots on the topic, I cannot find any authoritative/expert recommendations that recommend/urge to make sure that ssllabs shows 100% Key Exchange and 100% Cipher Strength instead of “only 90%” on top of an existing A+ rating. On the contrary, most are discouraging it.

The security gain is disputed, cannot be quantified, worsens compatibility, isn’t common security practice. Even websites that deal with millions or even billions of USD value such as banks and crypto exchanges don’t go for this. Neither any security-focused operating systems.

Since Whonix isn’t a web application project, bank or crypto exchange I’ve decided not to attempt to be special here.

In the wider context

it doesn’t seem any threat model would be addressed here.

Further research, discussion, implementation could take many more hours and these don’t seem appropriately allocated in context of other tasks.

So the chain will be:

Which is better than ours which has expired cert with RSA:

If the signing key is P-384, the signature MUST use ECDSA with SHA-384. When encoded, the AlgorithmIdentifier MUST be byte-for-byte identical with the following hex-encoded bytes: 300a06082a8648ce3d040303.

This is i think useful guide by certbot:

Adventures in software development and getting things done.

This means I need to take the default CipherSuites and simply remove any that use a cipher smaller than 256bit.

By this we will have 100% best ciphers, But only best available Key Exchange not 100%.

We can have 100% key exchange but only available now with RSA 4096 (according to daneil its slower) but not with ECC P-521 due to the limitation mentioned above.

More about ssllabs ratings can be found here: 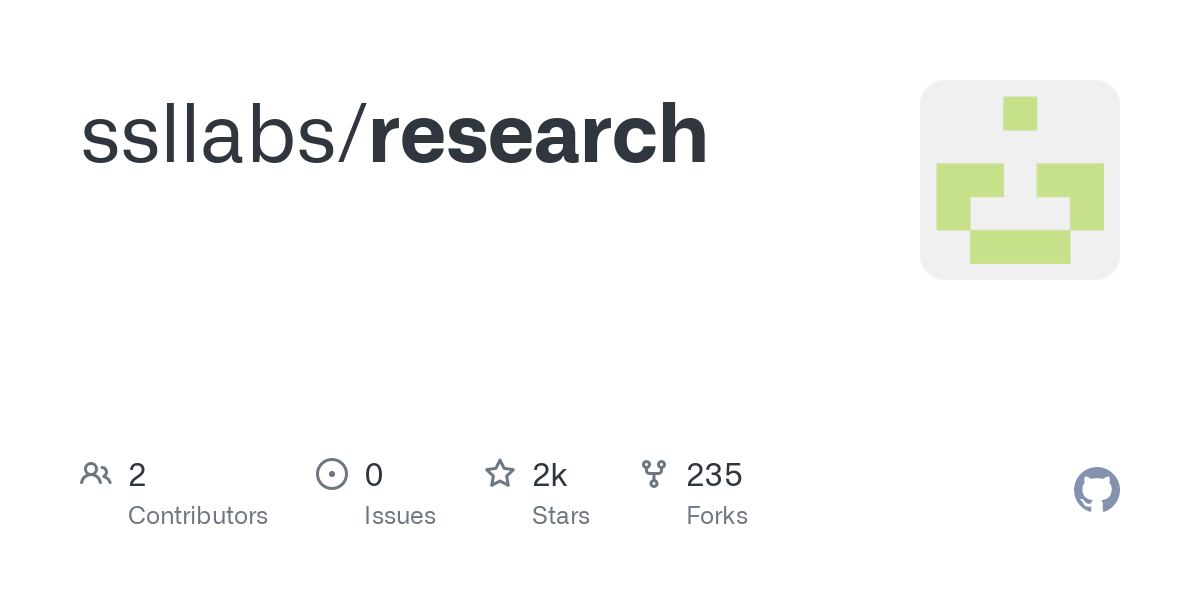 Contribute to ssllabs/research development by creating an account on GitHub.

Which is better than ours which has expired cert with RSA:

This is a non-issue according to letsencrypt. Quote:

Update September 30, 2021 As planned, the DST Root CA X3 cross-sign has expired, and we’re now using our own ISRG Root X1 for trust on almost all devices. For more details about the plan, keep reading! We have also updated our Production Chain...

What should you do? For most people, nothing at all!

Test websites also not showing a warning or downgrade the rating.

Moving to a EC 384 bits (SHA384withECDSA) certificate might make sense but there’s no rush.

This is i think useful guide by certbot:

This means I need to take the default CipherSuites and simply remove any that use a cipher smaller than 256bit.

In theory, yes. I tested the author’s website blog.bracebin.com with ssllabs and it didn’t have 4x 100%. Therefore it might be outdated and not work anymore. Also instructions aren’t for nginx so I cannot apply them.

I was also reading:

In one reply, the author included a link to a blog post:

And then tested the author’s website dawnbringer.net on ssllabs but it has only 2x 100% and 2x 90%.

My website uses Cloudflare as a proxy and waf but scores lower than that. But all my internal hosts use this profile since I only want to use TLS1.2 or newer to begin with. This domain (oceandns) does have the above profile running: Check SSL Labs here. For an ECC/ECDSA enabled site check: here

The test result is “only” 4x 100% but with an A rather than an A+ rating. So still not the perfection you’re seeking here.

So in summary, I haven’t seen any server on ssllabs.com, that has:

that has published its server config so others can reproduce this.

to use the E1 key, there is an allowlist, which you have to sign up for

Moving to a EC 384 bits (SHA384withECDSA) certificate might make sense but there’s no rush.

To make it happen:

More reading on the topic:

This directive appeared in version 1.19.4.

The server is currently on the same nginx version as Debian bullseye.

Therefore this option isn’t available yet.

Therefore this option isn’t available yet.

In debian next release bookworm this option going to be there.