Well, seeing how my last comment on getting this to Github is already over a month old, I should probably start working a bit more continuously on the projects I start. Anyways, have rewritten, simplified and recompiled this project now and thus tried pushing it to Github.

I’ve exceeded their data limits, which is why I was forced to migrate this project to GitLab. You may find it here (sourcecode will be added soon): https://gitlab.com/EgoBits1/Whonix-Installer/blob/master/Whonix-Installer.exe

All in all though, I feel like the current version is usable and stable enough for a public release. I even compiled it on a fresh EC2, so there is no way my clogged up hard drive could have had any negative impact on it (as has sadly happend in the past).

The only I’d need for it now, would be the content of the legal disclaimer at the beginning of the installer. Should I simply copy the one we currently display when importing Whonix? I am not certain what legal ramifications there could be to guard against, so this is something which should definetly be discussed beforehand. Once we’ve dealt with that, this should be ready for release.

Oh. Please do not mix source code and binary data into the same folder.

Binary data is probably not welcome at any free git hosting service as far as I know. (However, the worst that can happen is hitting a data limit or having the account deleted.)

So one git project should contain all the source code and perhaps textual build instructions. Another option to host build instructions is Whonix wiki (where for example Whonix build documentation is located).

The whole disclaimer stuff is pretty experimental and unclear, little tested legal waters. It’s a protection from being sued. Hopefully. The idea is that Whonix is free, therefore only “lesser liability laws” for free stuff applies. Also it is upfront about being experimental. By explaining it in detail, it should be difficult to pretend having gotten to pretend that someone thought Whonix provides strong guarantees for anything and now something unrelated on their computer is broken and Whonix is fault.

These are hardcoded in this script:
https://github.com/Whonix/Whonix/blob/master/build-steps.d/2700_export-vbox-vm

Any non-disclaimer text useful from there?

Binary data is probably not welcome at any free git hosting service as far as I know.

Wasn’t aware of that, assumed that is what Git LFS is for: Announcing Git LFS Support in GitLab | GitLab

Will take it down again.

So one git project should contain all the source code and perhaps textual build instructions.

Sure, I started creating a basic guide already. Will put it on the wiki once finished as well.

Any non-disclaimer text useful from there?

Anyways, I’ll put something together then, based on this and put it up here once finished for a final review.

Any idea where we can upload your binaries then? I guess we should distribute them from whonix.org. How do we grant upload access to Ego? We’ll install sftp or something or create an ssh user account with access to a Windows downloads access folder? @fortasse

Of course. Did it with the older builds on mega already, if you recall.

Any idea where we can upload your binaries then?

Well, I’ll, for the time being, simply put them on one of my servers, so anyone may download it from there.

I’ll give them a try once downloadable.

Once we want to encourage public testing/use, I can download them from there to whonix.org server until file access is sorted out.

Seperate ones for Whonix-UI will be provided in the future.

Looks good! I try to rebuild the whole thing once Whonix-UI build instructions are available.

Sadly had to drop the more modern styling I had beforehand due to questionable compatibility with OpenSource-Licenses thanks to a few dll’s I’d have to bundle. Had to thus redo the whole thing.

Can you please reference those from one another?

And should we include them into the following wiki hierarchy?

Just cross referenced them. Also included it under /Dev, though I think we should keep it seperate from the Whonix-Build-Documentation, as it isn’t really a part of core Whonix.

I finally got to look into this. Hopefully I am able to test within a Windows 7 64bit VirtualBox VM.

Is it a sane assumption to think that due to platform specificness, it is very much unlikely that these components will be ever ported to non-Windows platforms? If so, can we please find better repository names?

(Because these repositories will appear under this list: https://github.com/Whonix.)

If so, can we please find better repository names?

Sure, just changed them to the following: 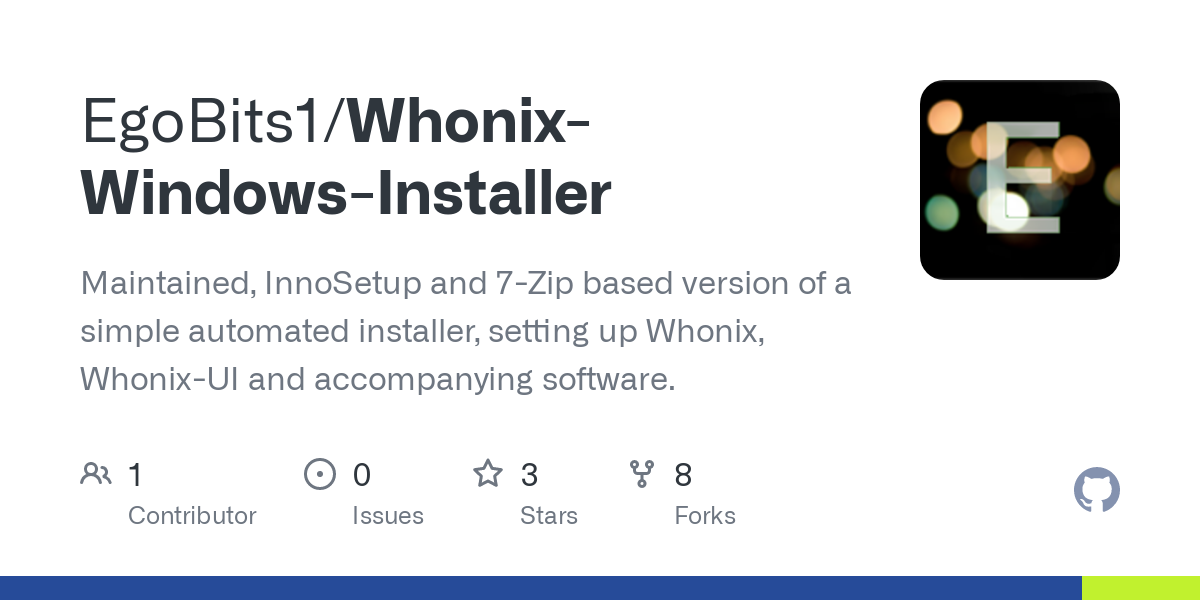 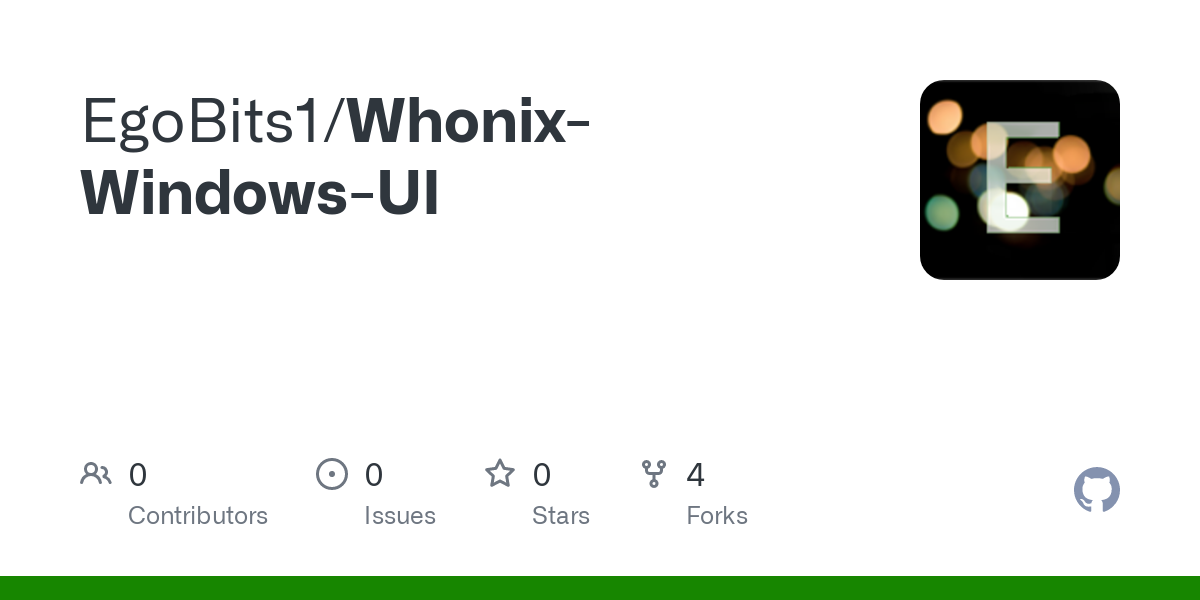 Contribute to EgoBits1/Whonix-Windows-UI development by creating an account on GitHub.

Is it a sane assumption to think that due to platform specificness, it is very much unlikely that these components will be ever ported to non-Windows platforms?

While this code won’t work on other OS’s, there have actually already been attempts at an Mac OS version for both.

Can you please fill out the blank for No description or website provided.? (Also due to soon being listed under https://github.com/Whonix.)

(description only since I will set website usually to Imprint - Whonix for legal reasons for repositories under github.com/adrelanos|Whonix).

Is any Windows-style signing of the downloadable binary that would be useful [or even required for higher windows versions]?

Well, if you go through the thread you’ll see that the only solution working is Authenticode, which requires a ~80$ per year certificate to function properly. Currently, there are no requirements for doing something like this thus, as asking developers to pay for a certificate for every program they make would be problematic.

However, UWP, which is somewhat of an “successor” to the old WPF is providing signing in some form without a certificate. However, UWP only works on Windows 10 devices which is why I didn’t use it. Also, the signing is somewhat tied to Microsofts own store front.

Either way, since the UI will likely only be optained via the installer which should be completley verified via GPG, I don’t see a big issue in not having such a feature at the moment.

Either way, since the UI will likely only be optained via the
installer which should be completley verified via GPG,

Yes, if anything it would apply to installer only since the UI is
included in the installer.

I don’t see a
big issue in not having such a feature at the moment.

Will (try) to address those issues by telling a user that the program should only be used with VBox if it isn’t found and prohibiting the use in that case.